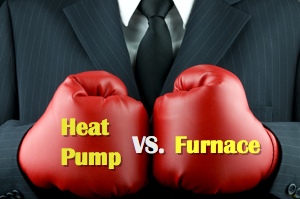 When it comes time to decide what kind of heating system you’re going to have installed, it can be hard to know which road to take. Whether you have to install a new heating system because the old one failed or you’re building a new home, or you just think it’s time for an upgrade, it isn’t always clear what kind of system will best serve you for your heating in Austin. Without any information about the relative differences between the types of heaters out there, choosing between a heat pump and a furnace is like rolling dice.

The thing is, there are quite a few differences between heat pumps and furnaces. They’ll both get the job done, and they both use the ductwork system that may already be in place in your home, but beyond that, they have very different methods of producing and moving heat. Furnaces are more widespread and common, but heat pumps are very effective and do the best in the less cold regions of the US like here in Austin. Heating is a big part of our lives during the colder months so this question of what to put in your home to bring heat into your days and nights is not one to take lightly. In this tip we’ll go over some of the primary differences between heat pumps and furnaces and the pros and cons of each.

Before we dive into the specific details that determine the differences between heat pumps and furnaces performance-wise, let’s go over the way that these things are measured. AFUE stands for annual fuel utilization efficiency and it is the rating through which heating power is measured. This is comparable to the SEER rating for air conditioners. It’s a universal yardstick for comparing any model of fuel-burning heater of any kind to any model of any other kind, which makes it extremely useful for what we’re looking at today.

AFUE scores are always shown as a percentage, making them very easy to read and understand on a conceptual level, unlike the SEER rating, which uses units most people don’t have much experience using and reading. So let’s say we’re looking at a heater with an AFUE of 60%. That would mean that 60% of the fuel burned by this heater can be used as useful heat to warm your house, and the other 40% is wasted through your exhaust vent. The higher the AFUE percentage, the more efficient the furnace or heat pump is.

The catch is that heat pumps are completely electric, and as such don’t burn fuel. They instead are rated using the SEER system because they are basically air conditioners who can reverse themselves. Still calculations have been made which can give us a rough estimate of the average efficiency of heat pumps as described by a percentage. And it turns out that they’re pretty efficient indeed. Most heat pumps carry an efficiency of 80% to 95%. Furnaces are going to range in their AFUE quite a bit, and this going to be determined in large part by the type of fuel that they’re burning. For example, a mid-efficiency natural gas furnace, which is the most common heater you’re going to find out there in most homes today, has an AFUE of 78% to 84%, while a mid-efficiency oil burning furnace is going to hover between an AFUE rating of 83% to 89%.

One big factor that determines whether you should buy a heat pump or a furnace we can get out of the way easily and that is climate. For those of us in the Austin area, it’s a given that using a heat pump is at least feasible because we have mild winters. For those in places where the weather routinely drops below freezing, heat pumps aren’t just inefficient; they probably aren’t going to be able to work. That’s because heat pumps don’t produce their own heat, they pull it from the outside. This is harder to do the colder it is out, so there’s a minimum temperature in which the heat pump will be effective.

So with that out of the way, let’s move on to another major factor, electricity prices versus gag prices in your area. Within a single climate zone, it may make the most sense to put in a gas furnace in one location and a heat pump in another. Natural gas rates have been really low for a few years now, but that hasn't killed the electric heat pump. One of the problems with comparing the cost of operating a gas furnace to an electric heat pump is that you're billed for each in different units. You pay the gas company for how many therms you use and the electric utility for kilowatt-hours. Then you've got to factor in the efficiency of the furnace.

If you really want to know which is cheaper, you've got to do the conversions and find out how many cents per Btu you pay for each fuel, with the equipment efficiency factored in. A more comprehensive analysis also would factor in the lifetime and maintenance costs of the different types of equipment. Still, with rates, efficiencies, and equipment costs all over the map, you can't make any generalization about always using heat pumps or always using gas heat. So the best you can do right now is research the relative prices of electricity versus the relative price of gas in your area in the recent years and factor that into your decision.

In this section we’ll dive into the first side of the argument, why you should buy a heat pump. The fact that furnaces and heat pumps are powered in very different ways lead to a lot of their relative pros and cons. One big con of furnaces that not everyone considers is that there are risks involved with heating your home using natural gas or burning any kind of fuel. There’s a fire risk and a carbon monoxide risk.

Natural gas and electric furnaces are both common options in modern homes, though both pose the risk of fire, either from the burning natural gas or an electrical arc needed to generate a flame. But heat pumps don’t need to generate a flame. In fact, they don’t generate heat at all. They just move the heat from the outside to the inside. Because of this, there’s no fire damage involved in the usage of a heat pump.

Another big pro for the heat pump side is system efficiency. What that means is that unlike a furnace, a heat pump is a two in one kind of device. It will handle both the heating in the winter and the cooling in the summer. It works in much the same way as an air conditioner, except during the colder months it just reverses the process, and uses refrigerant to absorb heat from the outside instead of from inside. So, buying a heat pump is like getting a new furnace and a new air conditioner all rolled into one. It’s an efficient purchase.

Also, heat pumps are universally more efficient than furnaces. As we saw in the previous section, because they don’t burn fuel and merely transfer heat rather than create it, heat pumps have a big leg up over furnaces in terms of energy efficiency. They can create in the house one and half to three times more heat than they consume in the process. This makes them above and beyond the more environmentally friendly, carbon-footprint reducing option for heating your home.

Now let’s jump over to the other side of the argument. We’ll look at some of pros of using a furnace and cons of using a furnace to keep the equation as fair as possible. One of the biggest advantages that furnaces have over heat pumps is that they do better in very cold weather. Once the weather gets below 40°F the heat pump struggles to pull heat out of the outdoor air to heat your home inside. So a panel of less-efficient electric resistance coils (like the ones in your toaster) kicks on to assist heating your home. This electric panel costs more to use than a gas furnace would. So a gas furnace is preferred in areas with long, frigid winters.

This doesn’t apply very much to us in the Austin area though, as our winters aren’t very punishing. The next biggest advantage that furnaces have over heat pumps is the economical factor. Firstly, the initial investment, the cost of buying the actual heating system, whether it be a heat pump or a furnace, is going to almost always fall in favor of the furnace. In fact, furnaces are often going to cost $500 to $1000 less than a new heat pump installation.

And as far as efficiency goes, furnaces have come a long way. There are some furnaces out there with an AFUE of 97%, which rivals most heat pumps easily. That means that 97% of the gas consumed turns into usable heat within the home. And with furnaces you have options that you don’t have with a heat pump. You can get a natural gas furnace, an oil furnace, an electric furnace even. You can choose whatever fuel it makes the most sense to use for your area. Natural gas prices have been low recently as well, making it an attractive fuel-source that you don’t have the option of using if you go with heat pump route.

Whether you get a heat pump or a furnace is ultimately up to you and your determination of which pros and cons matter to you most. What’s more appealing, having an all in one heating and cooling device that runs on electricity but will cost you more upfront or having a fuel burning furnace that’s going to cost you little in fuel and initial investment price? If your furnace broke down you’ll probably want to replace it with a new one if your air conditioner is in tip top shape, but if your furnace and air conditioner are both on their ways out then replacing the whole system with a heat pump might make a lot of sense.

Either way, sometimes you don’t need to buy a new heater at all. Sometimes a heater break down just needs some repair or some tuning. Heater repair in Austin is easy to get with AC Express. AC Express is an Austin heater repair company that operates all over Austin and the surrounding areas, from Hutto and Manor to Lakeway and Taylor. If you ever require heating service in Austin, call AC Express!