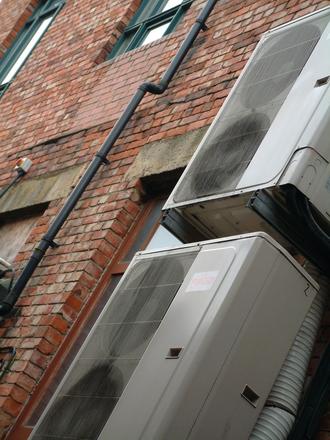 So, you’ve got yourself a new home and it’s come time to answer all the specific, detail-oriented questions about how you’re going to cool and heat the place for years to come. These are big questions, like what brand of air conditioner should I get? What kind of air conditioner do I want? What size AC unit is right for my house? And, the subject of this tip, how many AC units does my house need?

There are going to be a number of deciding factors when it comes to the question of whether your two-story house could use two AC units or one. Some of those factors include the size, the age, and the current status of your AC system.

The reason two-story houses are much more likely to make appropriate use of a dual AC unit system over one-story houses is because the average two-story houses is usually bigger than the average one-story house and because of the simple fact that heat rises. Because hot air naturally rises, it can be very difficult to keep a consistent temperature throughout a two-story home with only one air conditioner. This is because the air conditioner is going to be able to cool the bottom half of the house quicker than the top half, and the second, you might find, will often never reach the set temperature.

One way to deal with this is a zoned system. A zoned system is a legitimate alternative to using two air conditioners to keep both stories at a consistent temperature. A zoned system uses dampers in the ductwork to regulate the flow of air in such a way that the second story can keep receiving air even after the first story has reached the desired temperature. That way, both stories can be controlled separately, with separate thermostats and separate ducts, all powered by the same air conditioning unit.

The problem with this solution is that sometimes the house is just too big to be cooled by one AC unit, regardless of the sophistication of the zoning system. Residential air conditioners top out at 5 tons of cooling power. This refers to how much space the unit can cool. If you house is larger than that, a single unit simply won’t cut it. But even in cases where a 5 ton AC unit could possibly cool your whole home it can sometimes be less energy efficient than using two units. And sometimes the installation costs of a zoning system can rival those of a new air conditioner.

Older homes are going to have less robust insulation and are not going to circulate air as well. So, the older the home, generally the more it makes sense to add a second air conditioner rather than add a zoning system in the case where you find the second floor never gets as cool as the first.

In Austin, from Cedar Park and Leander to Lakeway and Round Rock, air conditioning units can provide sufficient cooling power to a maximum of around 3000 square feet with a 5 ton unit. One story houses larger than this will need two units to get the whole house to a consistent temperature. Also, if your house is particularly long shape-wise, or if some of the rooms are particularly isolated, then you might also find it difficult to keep the temperature consistent throughout the house. If a consistent temperature is important to you, you might find yourself spending too much on energy costs, having to keep the air conditioner running extra-long to cool down the harder to reach rooms in your home, thus making it cost-efficient in the long run to invest in a second air conditioner.

Pros and Cons of Two Units Versus Zoning

There is a grey area of situations in which you could easily make due with either two air conditioners or a single air conditioner and a zoning system. Let’s say you have a two story house and it’s big, but not so big that a single large air conditioner, say a 5 ton one, couldn’t cool the whole place down. But it’s also big enough that the second story is almost never cool enough unless the air conditioner is running a lot, and if the AC is running a lot, then the first story often becomes overly cool. So you’ve got this problem, a two story house big enough to be cooled by a single AC but not efficiently. What do you do?

Well, let’s say you opt to install a zoning system. One pro is that with only one AC unit, you only have one machine to worry about repairing and maintaining. You’ll only need one unit to refill refrigerant on, one unit to clean, one unit that could potentially leak or break down in some way. Another benefit is that balancing ventilation is going to be relatively easy. The two thermostats and single ductwork system will work together to ensure no more than the right amount of air is going to each zone in the house.

One downside of using a single AC unit is that you have no backup. If the AC unit conks out then you have no cool air until it’s repaired. Also, longer and more intricate ductwork paths will need to be installed as all the ductwork will be connected throughout the house and lead to a single unit.

There are many upsides to using a dual AC unit system instead of zoning your house. One pro is that both units can be significantly smaller as they have much less ground to cover each. Small units are less expensive and cost less to run. Also, in the case of an AC unit failure, you have a backup air conditioner so that cool air can still be provided while waiting for repairs on the other. And, because each unit is going to be powering its own system of ductwork, the ducts can be smaller, shorter, and lay throughout the house more efficiently.

As you can see, there are a lot of factors in involved in answering the question of how many air conditioning units your house needs. In many situations, if your house is below a certain size, one air conditioner is plenty. In some situations, if your house is above a certain size, you’ll almost certainly need two. But for a lot of cases, especially for those with two-story homes, you could do with one or two and you’ll have to consider the pros and cons or each, many of which were detailed above.