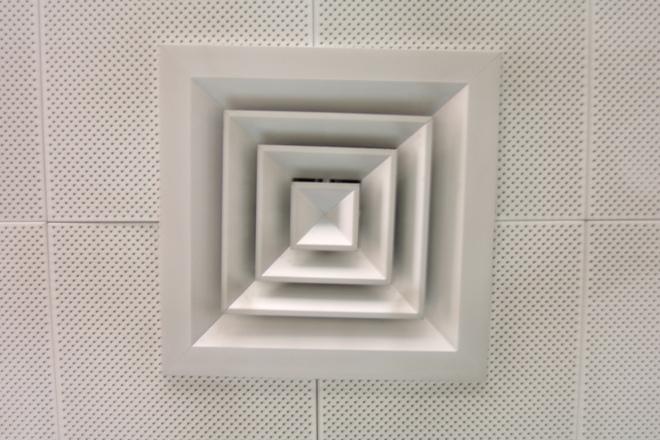 The placement of the vents in your home makes a difference, believe it or not. It may be something you’ve never paid attention to before or it may be something you’ve always wondered about but never sought out the answer. But the truth is, there are certain reasons why home builders will install the intake and output vent registers in your house either higher, near or on the ceiling, or lower, near the floor. Both placements have their place and today we’re going to talk about exactly why this is.

If you’re building a new house soon this may be something you want to consider when you’re planning the design of your home. It’s something that most people overlook but can have wide-reaching effects down the line. The placement of vents affects everything from your home furnishing options to how comfortable your house will be in the winter and summer. Read on to learn more about the placement of AC vents, both intake and blowing registers, and why the location of these vents can make a big difference when it comes to cooling and heating in Austin.

Reasons Ceiling Vents are So Common

One thing can be said with some degree of certainty, especially when it comes to the design of homes in our region of the US, ceiling vents tend to be more common than floor vents. If you think back to the times you’ve been in various homes and noticed the vents on the walls you’re more likely to remember vents on the ceiling as a more common occurrence than vents placed low, near the floor.

Why is this? Well, there are several sensible reasons. Let’s go over a few now. One reason is pretty common sense, that the ducts that the vents lead from are often placed up in the ceiling, especially when the attic is right there above the head. The attic is very commonplace for the bulk of ductwork in the house to be placed, for several fairly obvious reasons. Homeowners and builders are quick to take advantage of available attic space, which is empty, readily available, easy to access, and does not detract from living space, subsequently making ceiling vents the easiest location for delivery.

Cost is another instance where ceiling vents win out a bit in most circumstances. Simply chucking vents up in the attic without the added expenses of installation in conditioned or lived-in areas (drywall, framing, etc.) does indeed offer a more cost-effective solution, upfront at any rate. Another big advantage of placing output vents in the ceiling has to do with our particular climate. Living in the south of the United States, we deal with extreme heat much more than we deal with extreme cold. In fact, this past winter many of us have noticed a distinct lack of extreme cold weather all winter long. Yet we all know to expect some punishing heat as soon as the summer starts to rear its head. So we want the design of our house to reflect this and help us battle this heat the best we can. That’s something ceiling vents can help with. Because hot air rises, and cool air sinks, ceiling vents are the delivery system of choice for cooled air, particularly in hot, humid climates with a predisposition for cooling. In geographic locations where heating needs predominate, however, the story changes, putting floor vents in the spotlight. It’s a matter of thermodynamics and it means in the south you’re going to see predominantly ceiling vents.

Now, that’s a big reason for ceiling vents as a placement point for the exit and entry points of the ductwork, but there are other reasons as well. When you’re designing a house, you have to keep in mind that it won’t remain an empty shell long. Rugs, carpet, and furniture will fill up most of the rooms of your house and those things often need wall space. It’s never a good idea to cover up vents with furniture. Blocking vents can have a number of negative effects such as making the house less comfortable and making the HVAC system work harder. Ceiling ducts don’t hog existing or potential closet, wall, or ceiling space, making an interesting, or worse, unsightly decoration, and ceiling vents don’t present the decorative dilemma floor vents often due, forcing furniture to strange locations to prevent blockages in airflow.

So far we’ve talked mostly about the placement of the vents that blow air into your home and why they’re typically going to be placed higher up, especially in warmer climates like ours. Hot air rises and cold air falls, meaning in places where the delivery of cool air is more important than warm air, you’re going to want your air coming from above.

But what about the other half of the equation, the return vents? Well, it depends on what your needs are and what your HVAC setup looks like. First off, let's quickly get on board with exactly what we’re talking about when we talk about return vents. A return vent sucks in air and delivers it to the heating/air-conditioning system to be treated. The treated air is then forced out of the air vents into the rooms of the house, starting the cycle over again.

For heating-only applications, a low return duct is ideal to bring back the coldest air otherwise stagnant in the room. This is true regardless of the supply register location, floor, or ceiling. It’s the opposite when you’re cooling the house. In cooling-only systems, we want to return that warm, stagnant air near the ceiling first. This works well for attic systems due to the ease of installation. Adding a return duct to every room keeps the temperature difference between conditioned spaces low. Remember, in the cooling season the warm stagnant air tends to remain high in rooms.

But most of us have both a heating and a cooling system in our homes. That’s where you’re going to have to make some compromises. For combination heating and cooling duct systems, we have to decide on a location knowing that the performance of heat or cool will suffer. That is unless you install a high/low combination return duct in a wall. The problem with this configuration is that contractors were not ducting in the return, just using the open bay in walls and floors. Since this is not a sealed return air path, it is likely that very little air came from the conditioned space. So, most make a choice of either a high or low return.

Another thing to keep in mind is the placement of the return vents and the output vents in relation to one another. One big no-no is having these two types of vents too close to one another. You don't have to be an HVAC design engineer to see why having the air conditioning supply register above and just a few feet from the central air conditioning return grille is a bad idea. Cool air delivered to this room will mostly fall down to be simply drawn right back into the return. Poor supply and return duct locations like this can severely reduce the effectiveness of the cooling system and increase its operating costs.

Vents are something we rely upon greatly but rarely give much thought to. Their placement is important when it comes to building design and, believe it or not, even the professionals get it right all the time. That’s because there are many factors involved, such as what kind of HVAC system you’re working with, the climate you live in, the shape of the home, the location of the ducts, and many more.

One thing you can be sure of, if you need heater repair in Austin, look no further than AC Express. Our experienced technicians can get you the Austin heater repair you need at competitive prices. We do same-day heater and AC repair all across the Austin area, from Cedar Park and Georgetown to Lago Vista and Lakeway. If you need air conditioner repair in Austin or any kind of Austin heating service, don’t hesitate. Call today!