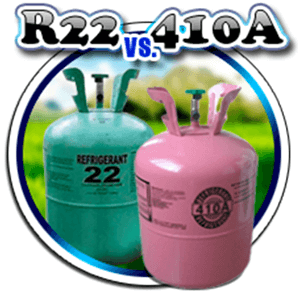 As of 2015, R-410A refrigerant is now the new standard to be used in air conditioners instead of the previously used R22. But why make the change? What is the difference between the two? R22, also called Freon, was discontinued for use in air conditioners in 2010 because it is a hydro-chlorofluorocarbon (HCFC) which depletes the ozone. R-410A, otherwise known as Puron, is a hydro-fluorocarbon, which does not deplete the ozone.

In addition to being environmentally cleaner, there are also some performance differences. Puron absorbs and releases more heat than Freon, so the air conditioning compressor can run cooler, reducing the risk of compressor burnout. Puron also functions at a higher pressure than Freon, so new compressors are built to withstand greater stresses, reducing the chance for cracking.

If your AC uses R-22 we recommended switching to R-410A refrigerant. Since there is a limited supply of R-22 its price will increase as supplies diminish. Also, R-410A offers greater efficiency, and is much better for the environment.

At AC Express, we can help you make the switch in your air conditioning system to Puron! We will painlessly guide you through the process of resolving any issues you may be experiencing with your AC and, as always, service calls are FREE! Call now! (512) 866-5520