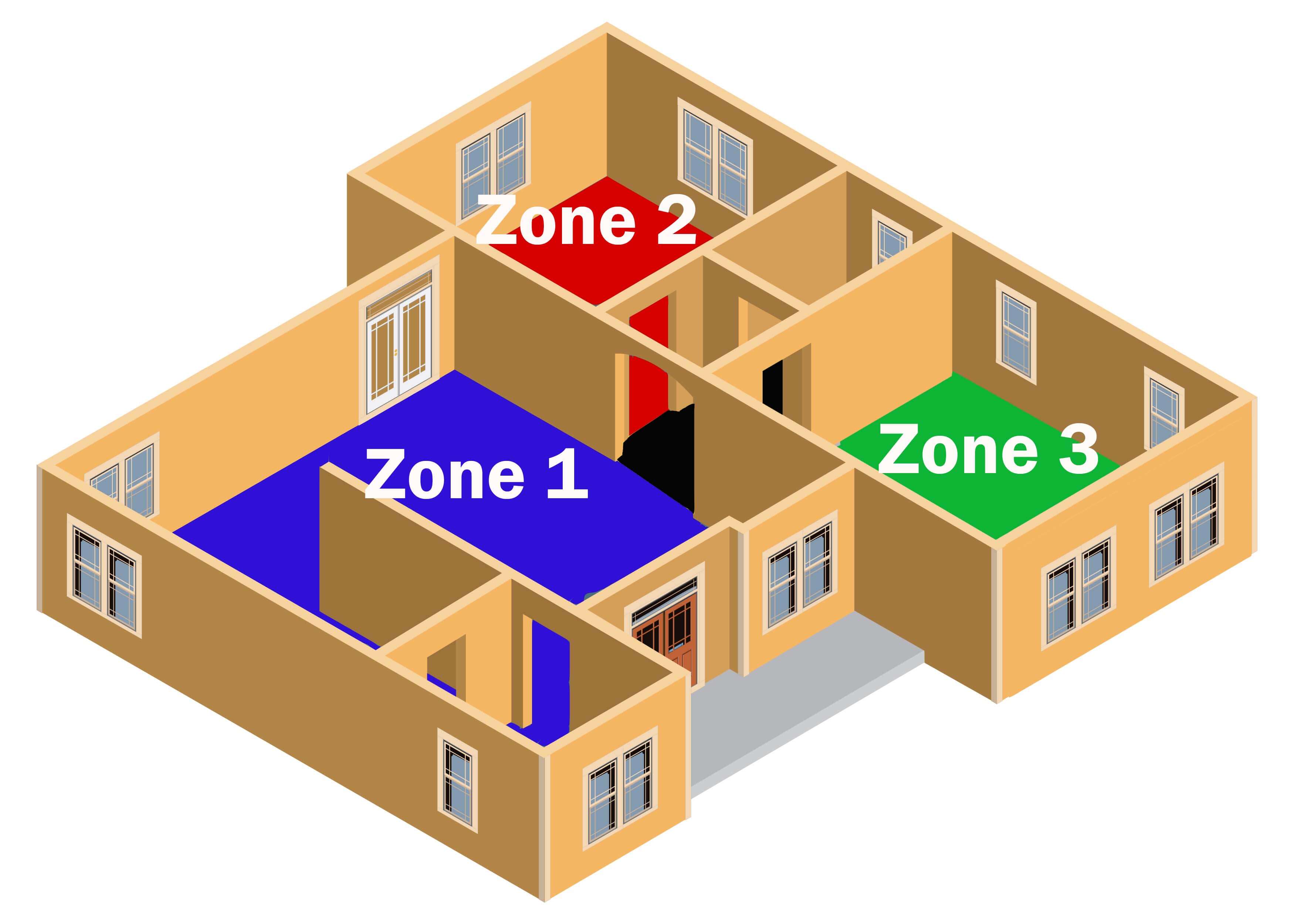 Zoning is great for people with large houses or for people who just want to maximize the efficiency of their home energy usage. It’s also a great way to increase the customization of one’s household. So for all of you who want better control over their home, increased comfort and customization, and increased energy efficiency, read on to learn all about zoning. In this tip I’ll go over what zoning is, how it works, the benefits of zoning, and the potential drawbacks and pitfalls associated with zoning.

As a concept zoning is pretty easy to understand. Simply put, zoning is when an air conditioning system is set up so that different areas in the house can be brought to different temperatures by the air conditioning system. This is, of course, completely separate from the phenomenon of varying temperatures in the house due to poor planning and incidental poor circulation. What we’re talking about here is the purposeful control of the air in the house in a way that divides the house up into zones, where separate thermostats independently control the air in different zones.

When is zoning usually implemented? Well, anyone could employ a zoning system into their household if they chose to but it tends to be more standard in certain situations than others. Those with multistory houses probably already have some kind of zoning system, with a thermostat for upstairs and a thermostat for downstairs. Those with special situations may already have zoning as well, such as houses with a lot of glass, large windows or glass walls, houses with basements or sunrooms, or bonus rooms above garages. These situations tend to lend themselves to zoning because heat dispersion in the house is going to be very uneven naturally.

How Does Zoning Work?

How zoning works varies, actually. You could see a number of different setups all of which have their place. For your standard multi-story home, zoning is probably going to be installed by default. That’s because hot air rises. It would be very difficult to keep the whole house the same temperature without zoning in a two story home because the hot air is going to collect on the second floor naturally. The most basic kind of zoning system that is typically applied in such a situation is one in which the house is broken into two zones and each zone is controlled by a separate thermostat which is connected to a separate system. This kind of system is very simple. It’s like having two homes, each with its own air conditioning unit, ductwork, and thermostat, that just happen to be on top of one another in the form of stories.

The other type of zoning comes with more sophisticated technology. This would be a zoning system powered by a single air conditioning unit. There would be separate temperature sensors in the different zones of the house but perhaps only one central, sophisticated thermostat. Of course, you could also have a single unit zoning system with different thermostats for each zone but it’s not a necessity. What a zoning system with a single air conditioning unit does have is a single, connected ductwork system and that requires dampers. Dampers are installed in the ductwork and allow the machinery of the air conditioner to control how much cool air flows to each zone.

So how exactly does zoning work in such a system? Well, mostly like normal air conditioning works, with a few slight alterations. Instead of one temperature being read by the one thermostat in the house, you have one temperature sensor for each zone the house is broken into. Then, when the temperature gets a certain distance away from the temperature set by the thermostat for any one of the zones, the AC kicks in. The automatic dampers attached to the ducts will let air through to only the zone that needs to be cooled or heated because it has strayed from the desired temperature. So, let’s say you have a guest room that doesn’t need to be nearly as temperature-controlled as the rest of the house for most of the year. You could make that room its own zone and have the temperature set to 80, while the rest of the house is set to 75 degrees. Then when the house gets to 77 degrees, the air conditioning kicks on but the dampers keep the flow of air from going to the guest room until it gets above 80 degrees.

The Benefits of Zoning

Most people could benefit in the long run from zoning if used effectively. Think of it like this: imagine if all of the lights in your house were controlled by a single switch. If you needed light in any room in the house at any given moment, you’d have to switch all the lights on. Not only would this be extremely inconvenient for a household full of people, some of which may be sleeping or want a less bright room than you, but also your energy usage would be through the roof. Efficiency is the main benefit of zoning.

With zoning, you can customize the temperatures in your room to maximize efficiency. For example, you could keep your bedrooms cool at night while everyone is asleep, but let the temperature rise in the rest of the house that is going completely unused. Or you could keep the den area a little warmer and the living room cooler. Or perhaps you have a guest room that isn’t used most of the year. It doesn’t make sense to keep it as cool as the rest of the house, so why not make it its own zone, and then let the temperature rise there except when someone is staying with you. It’s completely up to you. The great thing about zoning is that it allows you to customize your air to your liking and save energy as you do so. What’s the point in cooling the entire house if you’re only taking advantage of that cool air in a specific area?

Zoning is also great for certain special situations when, due to the design of the home, the temperature in certain areas is naturally going to be higher than others if air conditioning was applied evenly. For example, if you have a house with a bonus room that resides above the garage and is far from the central area, the temperature there is going to naturally get hotter. Making this room its own zone with its own thermostat would allow you to keep it at a consistent temperature without it being at the mercy of poor circulation or insulation.

There are other unique situations when zoning would be particularly beneficial. Houses with lots of glass, large windows or glass walls, are going to be heated by the sun in uneven ways and would greatly benefit from a zoning system that allows the areas with the most sunlight to be independently controlled. Houses with particularly high ceilings also could call for zoning, as that makes it difficult for a single air conditioning system to reach the whole house. Houses with basements or living spaces in the attic would also call for zoning. Basically, anytime the design of a home makes it difficult for the whole house to reach the same temperature, zoning is a great idea.

The most obvious and readily apparent drawback of zoning is the cost. While you could certainly save money in the long run by using zoning to efficiently control how much your air conditioning is running in less used zones of your house, the initial cost could be steep. Of course, for a new home, this is not of too much concern. But installing zoning into an existing house could end of costing a lot depending on a variety of factors. Some of these factors include the design of the home, the accessibility of the ductwork, the room for addition ductwork, etc.

If your house isn’t multiple stories, and therefore zoning isn’t a necessity, but it is quite large, it might require more than one air conditioning unit to properly apply zoning. In this case, the cost of installation is going to be more than double that of a non-zoned system, as two air conditioning units would have to be purchased and installed.

Another drawback with zoning is that it can be done right and it can be done wrong. If done wrong, it will end up causing you problems. One thing to look out for when talking to a contractor about zoning is bypass ducts. The jury isn’t out completely on whether bypass ducts are a good idea or a bad idea but the evidence at this point leans on the side of avoiding them. What is a bypass duct? A bypass duct is a small duct that’s added to a multi-zone system that connects the return air supply to the outgoing air supply.

If only one or two of the zones are calling for air, the dampers will cause the air conditioners to create extra pressure because one or two of the pathways are closed off. When the system is running but not all of the zone dampers are open, the bypass duct is supposed to relieve the extra pressure and maintain good air flow throughout the duct system. The problem is tri-fold. Firstly, the cold air rerouting to the return air supply will make the evaporator coil colder, which makes it less efficient. Also, the bypass duct will steal air from the ducts that are supposed to be delivering air to the zones that are turned on. The air flow will be disrupted. And finally, a colder evaporator coil is more prone to breakdowns and will likely need to be repaired more often. And AC repair in Austin is something we generally want to avoid.

So, zoning can be very beneficial, but it can also be costly and there’s always the potential for it to be installed inefficiently. So make sure that if you look into zoning, you find a high quality contractor who you trust.

Zoning, it’s a blast, of cold air, in different areas of your home at different times. Zoning is great for those with particular situations that make it difficult to control the temperature of your whole house, or those who want to increase the customization of their air, or those who want to save money on the cooling of rooms they don’t use nearly as much as others. Just make sure you’re talking to a contractor that knows what they’re doing, as zoning can easily get expensive and inefficient if installed incorrectly.

Installing zoning systems is just one of the many services that a reputable Austin AC repair company like AC Express can do for you. Providing quality air conditioning service to Austin residents (from Round Rock and Georgetown to Lago Vista and Lakeway) for the past 20 years, AC Express is happy to be a part of the Austin community. If you ever need any service done on your air conditioning system, from preventative maintenance to complete replacement, contact AC Express. Call today! (512) 866-5520