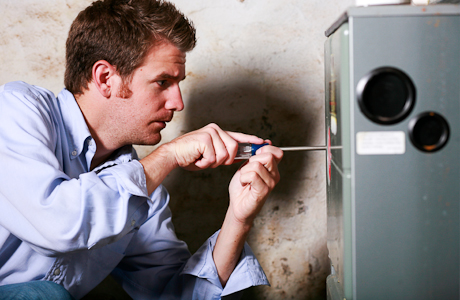 Furnaces are wonderful machines that can consistently make our homes warm and comfortable all fall and winter long but they aren’t always the easiest of home appliances to understand. Partially this is due to the fact that the bulk of the system is tucked away from sight and most of what they do happens behind the scenes. So while most of us rely on them to stay comfortable throughout our days and nights, few of us know exactly what steps to take if something goes wrong.

And the problem is that some causes of furnace failures are super easy to fix. It could something as simple as resetting a breaker or replacing an air filter. And then there are some causes that are more catastrophic and will undoubtedly require professional help. But there are also those in-between problems. Issues that could be solved DIY with the right knowledge of the procedure but without knowing what you’re doing you could very well opt to call a professional out as well. One of those things includes issues with the pilot light. Most people have never messed with the inner workings of their furnace but when it comes to pilot light malfunctions, there are many things you can try yourself before you call in a professional Austin heater repair technician. That’s what this Austin heating tip is dedicated to, the pilot light, how to light it, and how to troubleshoot it.

What is the Pilot Light?

The pilot light is a small flame that is either lit manually and remains burning around the clock or is lit electronically via an igniter when the machine kicks on. All gas-fueled furnaces use a pilot light. It’s the light that ignites the burners that heat the air in the heat exchanger. In other words, it is the initial trigger.

More specifically, pilot light is a small gas flame, usually natural gas or liquefied petroleum gas, which serves as an ignition source for a more powerful gas burner. In older furnaces, a pilot light was kept permanently alight; however, this is wasteful of gas. Now it is more common to light a burner electrically, but gas pilot lights are still used when a high energy ignition source is necessary, as in when lighting a large burner.

When your thermostat recognizes that the temperature in the house has dropped below the temperature it is set at it sends a signal to the furnace. This tells the furnace to release natural gas to the burners. Then the furnace’s pilot light or electronic ignition lights the burner inside the combustion chamber. This creates heat in the furnace’s heat exchanger, a metal chamber around which the moving air flows. The air in the heat exchanger warms up and then the blower fan distributes the air throughout the air vents and then the house. The pilot light is an essential part of this process. It starts the air warming process by igniting the burners which do the warming.

If your furnace has stopped working there are a lot of protocols you can go to in order to sort out the issue. There are many places where this process of warming your home can fall short. It could be an issue with the thermostat, with the electricity, and it could be an issue with the pilot light. That’s why if you can’t decipher the problem at first glance it is worth checking to see if there is a problem with your pilot light.

You may need a flashlight in order to see what you’re doing so grab one of those and head over to your furnace. Locate the burner chamber door for the furnace. The burner chamber is located at the bottom of the unit and the access door will be found on the front of the side of the housing. Remove or open the chamber door.

If your pilot light has gone out then your furnace will not work. The pilot light is a small but integral part of your heating system and without it the burner will not ignite, meaning the air in the heat exchanger will not warm up, and you might get air blowing out your vents but it won’t be warm. This is obviously a problem so it is worth knowing not just how to check the pilot light but how to relight it.

So let’s get started. Every furnace should have a label on it that tells you how to light the furnace. Sometimes, however, the printing may be small or the furnace area may be dark. In these cases, the label may be difficult to read. Keeping the following instructions near your furnace or in another safe spot where they can be located easily will make the task much easier so that next time you have all the appropriate information on hand. It isn’t a complicated task but you want to always know exactly what you’re doing when dealing with expensive equipment and fire.

Near the bottom of your furnace is a switch that normally says "Pilot," "On" and "Off." Find this switch and turn it to the "Off" position. Wait at least five minutes. This is important because it gives the gas time to dissipate, which is necessary to avoid possibly starting a fire. While you are waiting, take note of the location of the reset button, which should be near the dial you just turned to "Off."

Once the gas has had time to dissipate, turn the knob to "Pilot." Then, hold down the "Reset" button and bring the flame of a long lighter close to the pilot light opening. This should light the furnace pilot light. Once you are sure the pilot light is on, release your pressure on the reset button. That’s all there is to it. It’s very similar to manually lighting a stove, in that it requires using the mechanical means of releasing gas while simultaneously holding a long lighter up to the source of the gas.

If your pilot light goes out and you relight it but you’re still having trouble with it then the problem may be deeper than just a single breeze that took it out. If you’re having trouble keeping the pilot light lit then you’ll want to look further into the issue. Regular maintenance and troubleshooting are part of the upkeep of a furnace to ensure the pilot light remains functioning.

One common issue that can cause a pilot light to continually go out is a dirty pilot light tip, the part where the flame sits. This tip is known for collecting soot, grime and grit over the years. From time to time, this tip can become clogged with debris that blocks the flow of gas, resulting in a pilot light that won’t stay lit. Generally, a toothbrush or a small, stiff brush is enough to clean the tip. If you want to be thorough, turn off the gas to your furnace, completely remove the tip and soak it in a degreasing solution, such as what is used to remove grime from stovetops. After the debris has been removed, the pilot light should remain lit on its own. It’s highly recommended that you clean the pilot light every few months to prevent it from becoming clogged. This will save you a lot of potential headaches in the future dealing with a pilot light that won’t stay lit.

Other things that can cause a pilot light to go out include a malfunctioning thermocouple and something wrong with the gas. For example, normally, your pilot light should be burning a bright blue. If it begins to burn a different color (particularly yellow), then something is forcing the flame to burn inefficiently. Your thermocouple will sense this and shut off the gas valve to your pilot light. This could be a problem with the gas supply that will require calling an Austin heating professional.

Pilot lights are an essential part of how your furnace operates and keeps your home warm. Understanding what they do and how to relight them can save you a lot of trouble when something malfunctions and your heating runs short. Though many problems with your furnace can be solved yourself, there are many more that will require calling for some professional heater repair in Austin.

That’s where AC Express comes in. We bring quality heater repair to Austin and the surrounding areas, from Buda and Kyle to Liberty Hill and Taylor. If you have any problem whatsoever with any heating or cooling system don’t hesitate to call. Contact us today for same-day heater repair service.